Warning: date(): It is not safe to rely on the system's timezone settings. You are *required* to use the date.timezone setting or the date_default_timezone_set() function. In case you used any of those methods and you are still getting this warning, you most likely misspelled the timezone identifier. We selected the timezone 'UTC' for now, but please set date.timezone to select your timezone. in /home/thcfinder.com/public_html/includes/functions.php on line 98
 Do College Girls Smoke Marijuana? | Culture Marijuana Blog | THC THC Finder 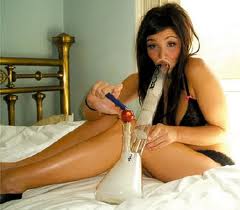 Marijuana is everywhere these days: the news, on TV, in ardent political discussions about medicinal pot. Then, of course, there is the popular stereotype about college students and pot - you know, that all college kids do is smoke.

But what about college girls? Do they use marijuana as much as their male peers? In an article for Her Campus, Amanda First investigates about the relationship between female college students and the most popular illicit drug.

Marijuana. Weed. Grass. Bud. Mary-Jane. Cannabis. Whatever you call it, you've probably seen it, smelled it, or smoked it at some point. Marijuana is, after all, far and away the most commonly used illicit drug in the world, with about 4 percent of all adults consuming it regularly and 0.6 percent on a daily basis. Humans have used the drug as far back as the third millennium B.C. for recreational, spiritual, and medicinal purposes, and in recent years a very public debate on weed's legality has caused many to question how harmful it really is. And just as marijuana has pervaded our national culture, so too is its skunky smoke as much a part of the air in our college campuses as the smell of Easy Mac. At my school, weed is so common that the university barely gives you a slap on the wrist for being caught smoking--a violation results in a brief alcohol education class and a mark on your record, while in high school it meant immediate expulsion. But even though it's all around us, weed is still illegal--and still dangerous in many ways. But how bad is it, really? HC talks to college girls, both users and non-users and Deb Lewis, Cornell's alcohol and drug expert, to get the low-down on getting high.